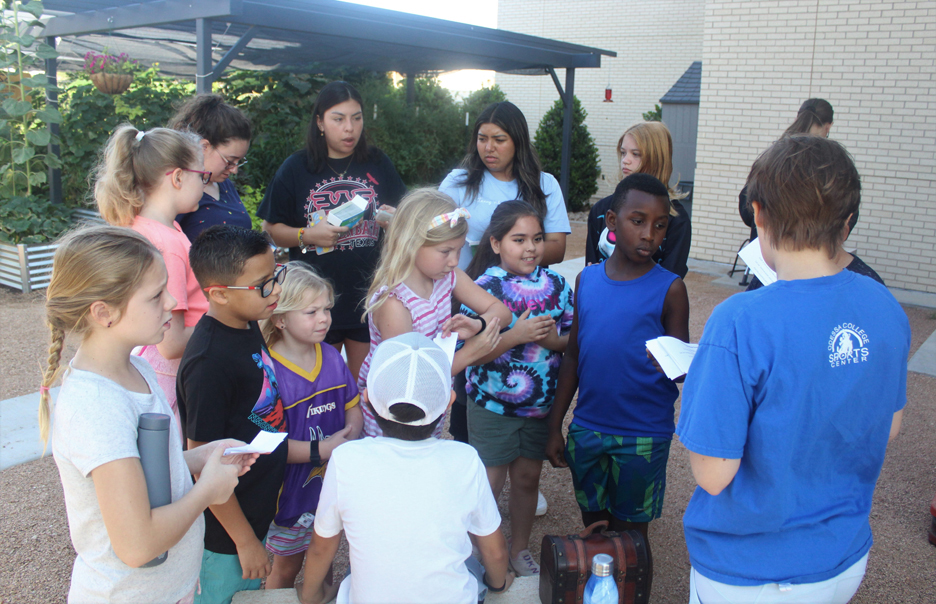 The camp ends with a zombie face painting and a zombie walk.

Maigen Pool was the instructor on Wednesday. They embarked on a treasure hunt and ended up at the Atmos Energy Pantry Gardens of Odessa College.

Kristi Clemmer, Director of Student Support Services, explained how the garden is used to supply produce to the Wrangler Food Pantry.

Clemmer also showed them sunflower seeds and answered questions about the different plants.

Fourteen children were registered, but not all were there. The age range was 7 to 12 years old.

Pool said the youngsters were given first aid supplies. “And the fire department and the police department talk to them about emergencies and preparing and how to deal with it,” Pool said. “Thursday (August 4) we paint their faces and they walk around campus doing the zombie walk and then we also do a zombie tag,” she added.

Twelve-year-old Scarlett Hughes has been to zombie camp several times.

“I like going to the fire station and the police talking to the kids. It’s a lot of fun,” Hughes said.

She added that she learned a lot of “first aid stuff” that she didn’t know.

Like many other campers, the fire station was his favorite part.

“We do a lot of treasure hunting and learning at the same time, but I don’t pay attention to the learning,” Sypolt said. “I do sometimes, but when it comes to math and other things, I don’t.”

The scavenger hunt doesn’t include math, “so I’m fine,” she added.

Seven-year-old Arianna Lujan said the camp was very cool and she also enjoyed visiting the fire station. She learned that if you’re in trouble, you should call 911.

She was looking forward to being made up as a zombie on Thursday.

Clemmer told the youngsters that sunflowers are so tall because that’s the kind they are.

She said they had some in pots, but now those pots are covered in ivy.

“…Everything we pick from the garden goes into our pantry,” Clemmer said. “…Sometimes students struggle to pay for groceries because they’re in college and they’re working, or maybe they’re not working. So we have a pantry where they can come and get food help…”