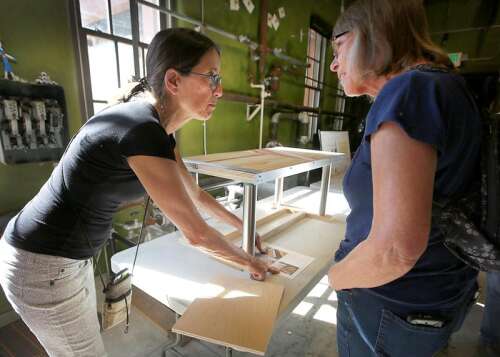 Pat Miller describes the coffee table she made from recycled materials to Suzie Grimm at the 2019 MakerLab and Powerhouse Celebration for the inaugural Spring-Build-Up furniture competition at the Powerhouse. The MakerLab has found a new location for its facilities on Turner Drive and is expected to open in mid-May. (Jerry McBride/Durango Herald file)

The MakerLab has spun off from the Powerhouse Science Center to establish its own location on Turner Drive with more space for manufacturing machinery such as 3D printers, laser cutters and more. The Powerhouse seeks to accommodate Big Picture High School students in the space freed up by the MakerLab.

The MakerLab, a materials manufacturing facility that has rented workspace at the Carlton Family Science Education Center at the Powerhouse rent-free since 2016, is moving to a facility at 434 Turner Drive, Suite 6. The cause for the move is the need for more more space than the 1,800 square feet available at the Powerhouse.

Brandon Walter, one of MakerLab’s founders, said in a press release on Tuesday that the new location offers about 3,500 square feet of space, nearly double the size of his space at the Powerhouse. Walter said the new location will allow MakerLab to expand its existing disciplines and incorporate new ones.

Jeff Susor, executive director of Powerhouse, said the Powerhouse for MakerLab space had always been seen as a temporary setup since the organization’s founders approached the science center in 2015.

“It was a group of volunteers who were really part of the powerhouse asking to launch as a separate organization with a new space, and it seemed like the time was right and the opportunity was right for them” , he said on Saturday.

The Powerhouse and MakerLab have spent the last few months working out the details together. The MakerLab has come and gone over the past two weeks, Susor said.

The MakerLab is scheduled to open in mid-May and will provide equipment and tools such as laser cutters, 3D printers, metal and woodworking workshops, textiles, electronics, design computers and dedicated classrooms and conference spaces, according to a press release.

“This is a very exciting time for MakerLab,” Walter said.

Susor said MakerLab’s decision was a “win-win” for both organizations. The Powerhouse is first and foremost an educational institution for children.

“When they came to us with this (relocation), we were like, ‘Well, shoot, that’s a no-brainer for us too,'” he said.

Susor expects Powerhouse’s summer education program to welcome about 450 children this year, more than double the number of program enrollments in the COVID-19 pandemic, he said.

“So just having access to that space (left over from MakerLab) and the ability to develop programs in that space, that’s going to be a huge asset to the Powerhouse,” he said.

Susor said the Powerhouse summer program fills a need for additional learning because there has been so much disruption at schools.

“I think everyone sees the same thing in terms of summer learning demand for kids,” he said.

Susor’s immediate plan for the freed up space of the Powerhouse is to house the Big Picture High School students there. The high school is attached to the Durango School District’s 9-R Administration Building, which was sold to the Durango Fire Protection District last year.

Although Fire Chief Hal Doughty said the school district can continue to use the facilities through the end of the year, the district is working to find a new location for Big Picture High School.

“With the sale of the district office, there’s kind of a short-term need to find a home for Big Picture while we find a long-term place for these kids,” Susor said.

But before the school district can use the power plant space, Susor must get approval from the Durango City Council, which owns the science center, he said.

“The power station is technically owned by the city, although almost all the money to renovate the space and do the environmental remediation came from us as a non-profit organization,” he said. he declares. “Our owner is still the city.”

Susor said he was meeting with Durango’s planning department and city manager Jose Madrigal on Tuesday to discuss the possibility of hosting Big Picture High School at the Powerhouse for two years.

“It’s a chance for us to work more closely with 9-R than we’ve ever done and really deliver a real, urgent solution to make sure there’s a good, safe place that inspires these kids. as they look ahead to the next school year,” he said.

Lisa Stone-Muntz, Chairman of the Board of Powerhouse, said in the press release that she was grateful for the time spent working with MakerLab.

“A heartfelt thank you and appreciation to the MakerLab Leadership and Powerhouse Board of Directors who have worked closely together to plan for the future and create even more exciting opportunities for children, youth and adults to thrive in our community,” she said.

The Powerhouse has donated more than $200,000 in in-kind support to MakerLab through free space since the project began, according to the press release.

The Powerhouse will host its own creative space for school-aged children in its gallery. Powerhouse’s TinkerLab at the Mensch Spark Shop will also allow children and guests to learn about 3D design, robotics and engineering, according to the press release.

Tips for Keeping Your Child Safe on Discord