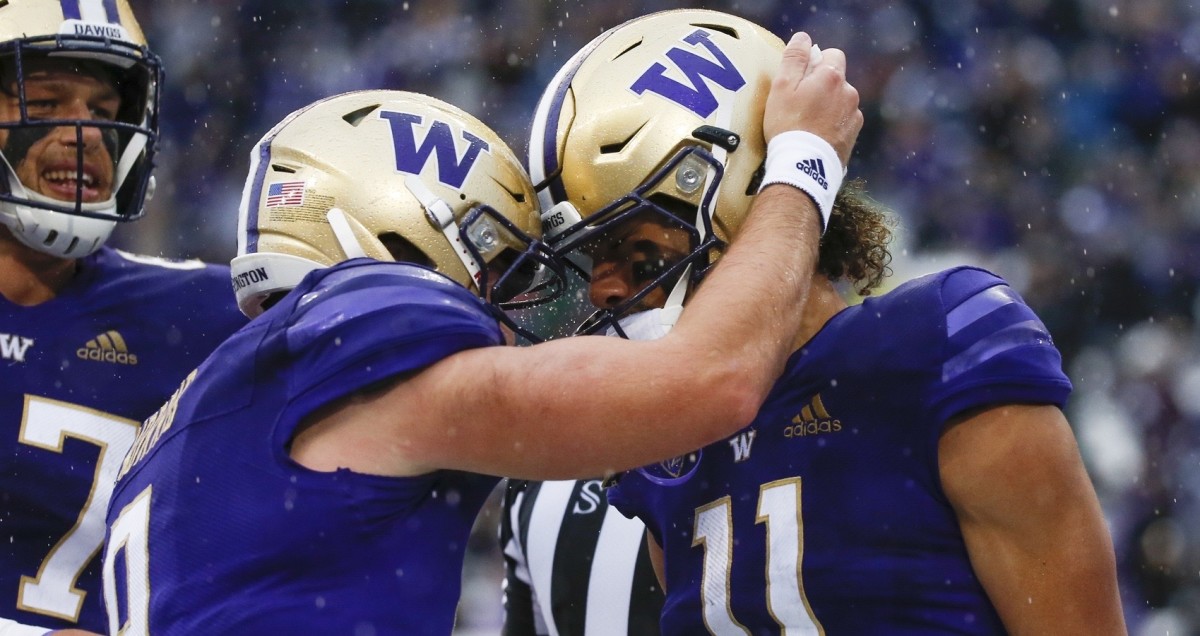 Huskies find comfort zone and offensive end zone over and over, win 52-3

The University of Washington football team finally found an offense Saturday afternoon at Husky Stadium. Someone better alert the fan base. While there were plenty of touchdowns and yards to go, surprisingly few saw it happen in person.

In front of one of the smallest crowds in recent memory – at least when allowed indoors by the pandemic – the Huskies scored on four straight possessions in the first half, all 70 to 93 yards in length, and did to the state of Arkansas what they should have done in opening Montana.

After playing 3-and-out to open the game, UW fought off touchdowns from Cade Otton, Sean McGrew, Richard Newton and Jalen McMillen in that order and in a rapid progression to easily distance themselves from visitors to Sun Belt.

The lopsided result and production helped calm some critics and made the Huskies feel a little better about their previously underperforming state of mind.

What was different, anyway?

The Huskies have let quarterback Dylan Morris repeatedly stand in the pocket and throw up the field and an overly opportunistic McMillen; alternated four different running backs in the first half, giving sixth-year seniors McGrew and Kamari Pleasant their first runs of the season; and, two seasons ago, he used Newton of the Wildcat roster.

In addition, much-maligned offensive coordinator John Donovan moved from the sideline to the press box on game day, for the first time in seven games for the Huskies.

Husky Stadium never nearly filled half of its capacity of over 72,000 spectators, traditionally late or not, which was contrary to the announced crowd of 58,772. The obvious reasons for the low turnout were the COVID- restrictions. 19 that weren’t strong enough for some fans or turned off others, the rain that started falling steadily soon after the game started, and UW’s previous anemic offensive performances against Montana and the Michigan.

While the nagging pandemic and inclement weather might not change anytime soon, the Huskies are hoping the offensive won’t take more weekends off.

These guys were more like the team that had high hopes for the season, which was ranked 20th in the polls and should be one of the Pac-12 contenders.

Now, an offensive explosion against a clearly outclassed opponent doesn’t automatically guarantee future success against tougher teams, but it was substantial progress.

Morris led the Huskies impressively for 88 yards in 10 plays to open the scoring, hitting a wide-open Otton in the left corner of the end zone for points of the opener at the 8:21 mark of the first quarter. A 39-yard pass from Morris to McMillen, who landed a tough catch over the shoulder, got them up quickly.

After forcing a short goal from the Arkansas State field that missed, UW ran 80 yards in seven plays for a 13-yard McGrew touchdown run. It was his first appearance of the season, not to mention the races. He jerked over the line of scrimmage to make a defender look stupid and scored easily with 3:32 left in the first quarter. A 30-yard pass to McMillen helped this practice.

After a 3-and-out for the Red Wolves, the Huskies walked 70 yards on the field in 10 games to bring the score to 21-0. Newton did the honors, taking the direct snap, pretending to pass Giles Jackson and trotting 2 yards at the start of the second quarter.

Another 3-and-out later, these rejuvenated Huskies pushed 93 yards on seven plays for a 33-yard catch from McMillen TD, the first for the second-year rookie. He beat an Arkansas state defenseman in a run on the straight sideline. This time, Taj Davis caught a 39-yard pass to set it all up.

In his best UW outing, Morris completed 23 of 39 passes for 367 yards and 3 touchdowns, being intercepted twice.

He threw 10 balls at McMillen, who had 152 receiving yards at halftime, the most since John Ross racked up 204 against California in 2016, and finished with 175.

The Huskies added a pair of second-half scores on McGrew’s one-yard run and a 42-yard pass from Morris to an uncovered Terrell Bynum, while Arkansas State could only offer a field goal in the third quarter from Blake Grupe from 26 yards.

Morris gave way to rookie Sam Huard with 12:40 left. The anointed handed over to Pleasant on his first play, resulting in a 16-yard gain. After an incomplete pass, Huard lobed a 23-yard finish to Jackson in the middle, earning a big standing ovation. His first appearance ended with a 38-yard Peyton Henry field goal with 8:05 on

While the Huskies did not change their offensive lineup, they continued to trade starters in defense.

They opened with red-shirted rookie Daniel Heimuli at inside linebacker and red-shirted rookie Faatui Tuitele on defensive tackle. Heimuli made his career debut, replacing All-Pac-12 second-team player Edefuan Ulofoshio, who was playing as a reserve.

UW went with Tuitele instead of Tuli Letuligasenoa in second year, which gave him his second career start but the first this season. Letuligasenoa was also in uniform and replaced.

The Huskies have now traded four of 11 defensive starters since the opener.

The defense celebrated their first turnaround in three games, a third quarter fumble by bookmaker Radley Hiles caused by a big hit from linebacker Carson Bruener.

It was one of three, with Julius Irvin providing Husky’s first interception and edge rusher Bralen Trice topping the score with a 72-yard fumble return for a score following a Tuitele sack of the substitute. of Arkansas State QB Layne Hatcher.

Next up for UW is a home night game next weekend against California, with the Huskies hoping to continue their new offensive fireworks display against a more notorious foe in the conference. More fans would be welcome.

There are no easy answers to the condo collapse in Miami